Today we were asked by Wendy, a friend of Mary, if we could take and clean for her some of her belongings that went under in the flood but were salvageable. So we drove to her house which is in Corinda, next to Graceville, two of the suburbs which went under very early. The following pics are of the army of volunteers helping to clean up, plus the mountains of rubbish and the damage.

Many major roads are still under water or covered in inches of slushy mud. So we had to take a very circuitous route. As we got to the affected areas, the roads were very slippery with mud, gutters still had inches of mud and volunteer civilian helpers directed us away from blocked roads to alternative routes. The traffic was moving at a crawl due to the hundreds of vehicles driving in to offer their help. In the areas where houses had been completely inundated, the roads were lined both sides with 4x4's/utes of tradesmen and other volunteers. The footpaths were lined with an almost continuous line of discarded, ruined belongings. The stench has already started and is pretty strong; it will get much worse. Truckies and machinery drivers were everywhere volunteering their equipment and services.

Wendy's house was being cleaned upstairs by some folk with a high-pressure hose run from a generator on the back of a ute. When I asked Wendy who it was, she said "I don't know; they just turned up and started cleaning."

When you click on these pics they should open in a new window or tab. Click on them again to enlarge even further. 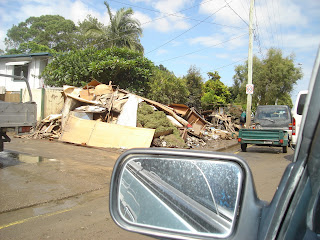 Taken as we drove towards Wendy's suburb 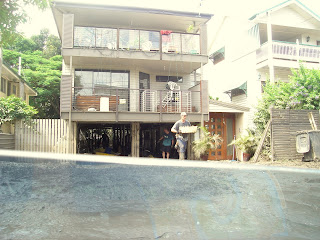 Apparently only the lower floor went under - lucky ones! 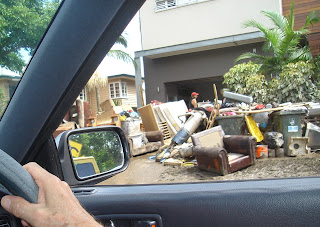 The rubbish piles up 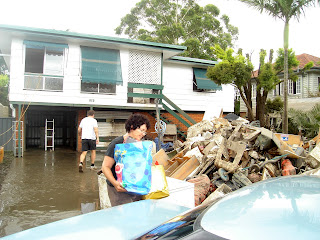 Wendy and her house. The hoses to the high-pressure cleaner going through top window.The brown mark on the blinds shows the water level. 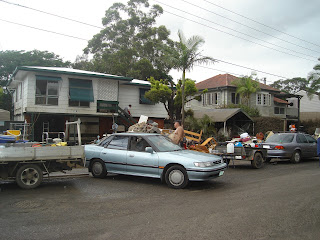 Our car with the boot and back seat loaded. Wendy's husband, Bill, and his trailer loaded with his garden and other tools, salvaged and roughly washed. The unknown heroes are visible upstairs. 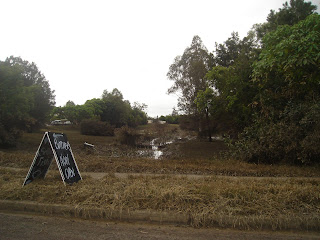 One of the many creeks. Muddy road and grass. 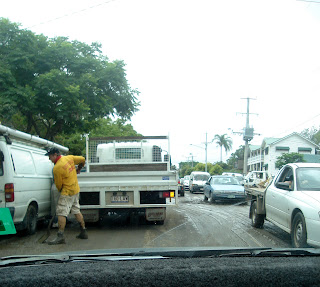 On our way home; endless volunteers still driving in. 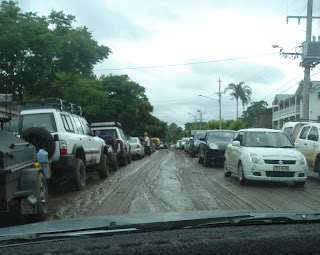 Nice clean street !! Note the rows of parked cars of the helpers, and more still coming. 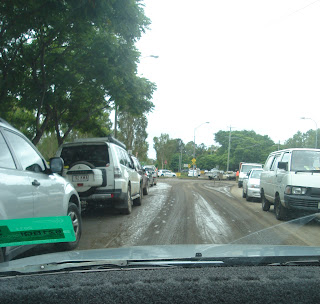 Starting to move out of the worst-hit areas. 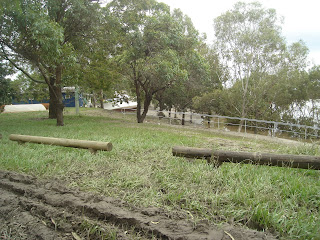 A boatie who seems to have parked where he shouldn't? Zoom in to see the boat more clearly. 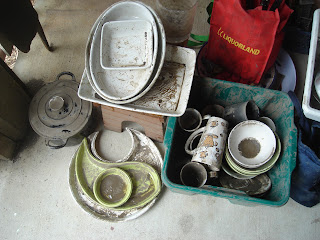 Some of the utensils we brought back to clean. They had already been hosed down to get most of the mud off. There were also several photo albums; Mary has rescued most of the photos which are now drying out downstairs.
Posted by Chris (Nobby) H at 8:59 PM

This new blog page has just been constructed. The previous blog, using Wordpress, died and would not let me log in nor amend the configuration. So I have saved the previous posts and they are all posted here.

These are some photos taken on Christmas day.

Note that clicking these thumbnails opens the picture in a new tab or window.Some will enlarge a second time if you click the picture again

These are several shots taken during October November; Max being 20 months and Claudia about 12 months
Posted by Chris (Nobby) H at 5:00 PM

More of the grandchildren

Here is another photo of Max and Claudia. It was taken early January 2007 - Max was 10½ months and Claudia nearly 3 months.
Posted by Chris (Nobby) H at 8:01 PM

I have now put all of the travel pictures on this site with short comments for each pic. They are divided into three sections - Brazil, North Peru, the rest (Lima to Buenos Aires)